Every month in the Center is rich in a variety of events! Meetings, holidays, workshops and much more. It’s time to tell you what happened to us in May. So let’s go. 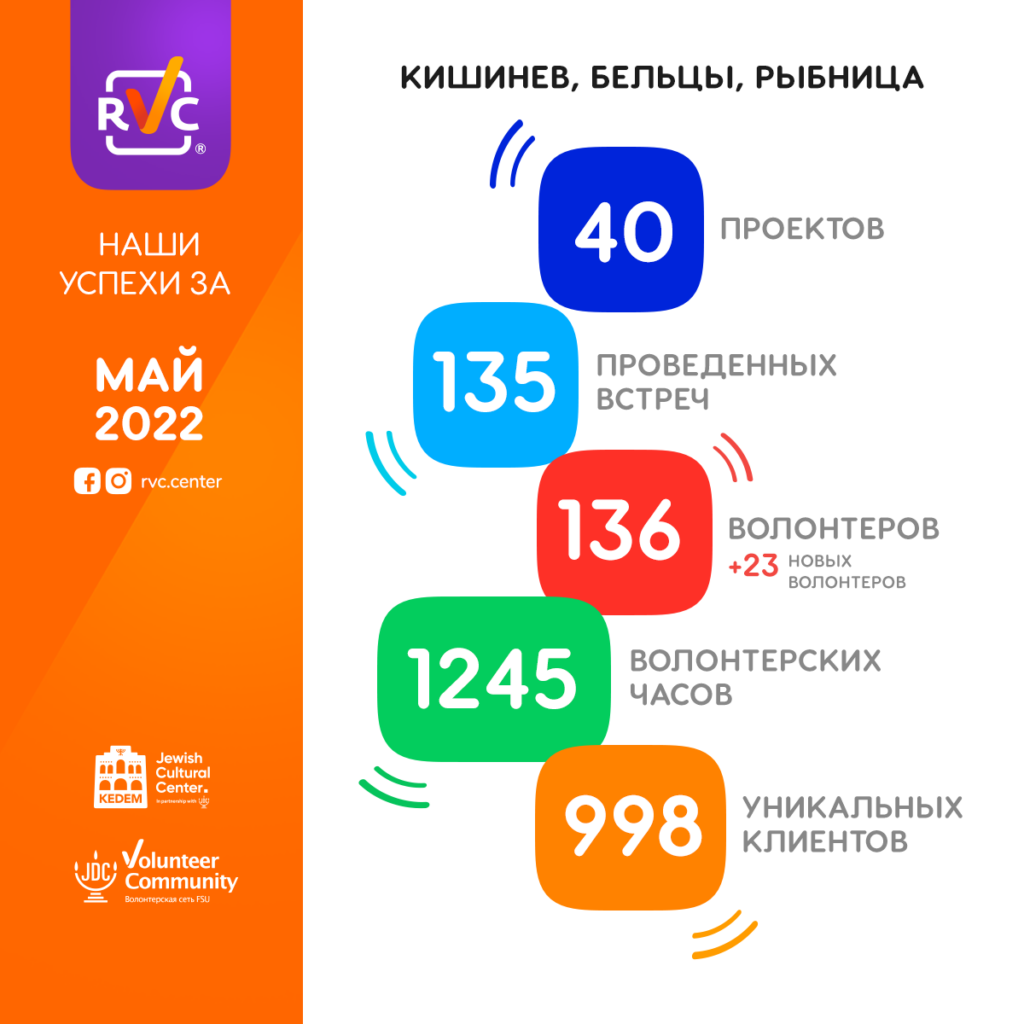 We had a meeting within the framework of the Limba noastra project, because the programs at the Russian Exhibition Center for children are aimed not only at studying Jewish tradition and culture. Our volunteers try to pass on the knowledge and skills they possess. Since Romanian is the state language, many parents and children want to know it at the proper level. Currently, classes are held for two groups: for young children in a playful way and for older groups, where volunteers prepare schoolchildren for exams. Which, by the way, were handed over perfectly!

Also, we had several meetings with a psychologist in a variety of formats.
One of the topics of training with a psychologist was the concept of resentment and the ability to forgive. Together with psychologist Lina Tetyusheva, the volunteers tried to analyze themselves and understand how often they are offended, what offenses exist and how to be less touchy and receptive to various situations. In addition, in May, 2 supervisions were carried out with the psychologist L. Semina. The meetings were held online. Discussed the topic of depression and apathy. How to distinguish what symptoms, what to look for, how to deal with this condition. We talked about subordinates.

The second meeting was held in the discussion of the topic of contact between the new volunteer and the ward, how to start communication, build a conversation, talked about the period of adaptation of both parties. The meeting ended with the reading of a motivating poem to maintain vitality. Well, do not forget about our meeting on the topic “Communication”, where Lyudmila told us about the life hacks of tact and communication skills. We are sure that all this knowledge will be very useful in your work, and most importantly, it will help you better understand and communicate with older people.

On May 4, Israel celebrated the Day of Remembrance for the Fallen in Israel’s Wars and Victims of Terror (Yom a-Zikaron).

And in the evening of the same day, the main state holiday of Israel began – Independence Day (Yom Haatzmaut). The wards of Hesed Yehuda from Balti listened to the story about it online during the week. They learned with interest the story of how the country turned from a flourishing country into a desert during the transition from one invader to another. Then, from a desert, it gradually turned into an advanced science-intensive and high-tech country, which we know it today.

On May 13, we congratulated veterans on May 9!

Volunteers of the Russian Exhibition Center congratulated the elderly veterans on May 9 and handed over tasty and healthy gifts with the best wishes for good, peace and health! We congratulated 10 elderly clients of HESED who survived the Second World War. We talked with them, giving each other warmth and smiles. 7 volunteers of the Center took part in the action.

Within the framework of the event, an action was held from the project “School of Repair” – “Who, if not us.” The action was to ennoble the private territories of the elderly. All volunteers did their work efficiently and accurately, not forgetting about safety precautions. In total, the participants spent 4 hours of volunteer activities. The beneficiaries of the action were very pleased with the result and sincerely thanked the volunteers.

On May 19, Israel celebrated one of the most ancient holidays – Lag B’Omer.

The wards of Hesed heard the story of this paradoxical holiday, because it is celebrated on the day of the death of one of the most prominent sages of the Mishna era, Rabbi Shimon bar Yochai (Rashbi), who wrote the main book Zohar – the main book of Kabbalah. On this day, the epidemic stopped, from which all the students of Rabbi Akiva, another outstanding sage, teacher Rashbi, died. About how and why such tragic events became a holiday, Hesed clients listened with unrelenting interest.

As part of Lag B’Omer, a “Big Day” was held. At the interactive fair at the JCC KEDEM, the RVC team held 2 interactive stations that helped guests and participants of KEDEM programs get acquainted with the history and tradition of the holiday: an educational game of darts, where each hit gave the team participants an interesting fact about the bonfire festival, as well as a discussion club around a makeshift fire, where everyone had the opportunity to share their knowledge and discover something new about this day. The stations attracted both young volunteers and representatives of the “golden age”.

In May, the first excursion for the elderly was held together with the Russian Exhibition Center in collaboration with museums. We all had a great time together, talking and learning new things. The elderly were satisfied with our meeting, they admitted that they themselves would definitely not have decided on such a walk. In the process, we remembered a lot about what our city once was. It turns out that the

The building of the museum was designed by Bernardazzi. The tour was led by Elena, who timed our meeting to coincide with the Family Day holiday, talking about the work of married couples of artists and their heritage. She told and showed how the style of Moldovan artists changed throughout their entire career, and how exactly these changes can be traced through their work. In the future, we plan to carry out such a project on a regular basis. Meetings in this format make us love our country, culture and history even more.

And, of course, we have not forgotten about our birthdays! Happy birthday in the month of May volunteers congratulated 101 people!

Thanks to everyone who was with us!

Nikolay Railen and  Nikita Soloviev are going to talk about arrangements for  #GoodDeedsDay and prepare two dishes. Which ones?

Training with a psychologist as a part of the “Origins of Mercy” Project !

Educational seminar for the new volunteers of the Call Center project

Not long ago, the first educational seminar of this year for the new volunteers of the Call Center project took place.